The Legend of Purple Aki

Every place has urban myths and legendary beasts - Scotland has The Loch Ness Monster, 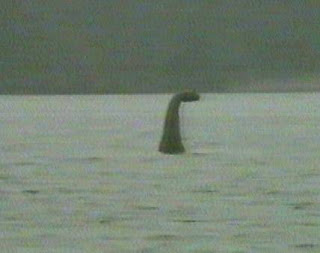 Virginia has The Mothman 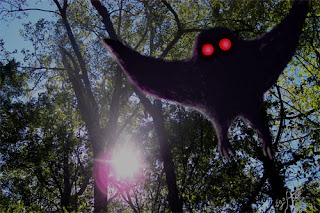 and rumours have abounded for years of the infamous Abominable Snowman, or Yeti of the Himalayas, 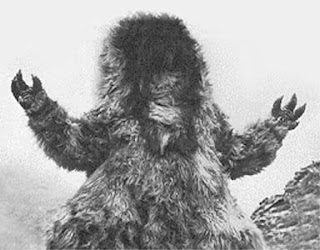 but NONE of these creatures have terrified the local populace so much as the local mythical beast of where I grew up, the all-too-real man-beast known as...
...PURPLE AKI! 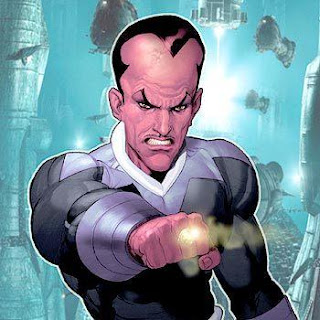 Y'see, back in the days before the internet, it was a lot easier to be mysterious and for unsubstantiated gossip to spread and mutate like wildfire. So it was with the shadowy figure known to us kids as Purple Aki. He was used as a bogeyman figure (yes, BOGEYman, not BOOGIEman like you fucking septic tanks use...seriously, are you THAT ashamed about disco?) by unscrupulous parents in the eighties in order to bend children to their will..."If you don't get to bed/do your homework/eat your greens, Purple Aki will get you!"...and stories were often told about him and encounters other people had with him, mostly bullshit we figured, but scary nonetheless.

As a kid, I heard the name around and learned the following 'facts' about him - that he was a large black man who was from Toxteth in Liverpool (A predominantly poor, black area where I spent half of my life living. It's a ROUGH place and is mostly famous for rioting and heroin) but was often seen around the St Helens area (Near where I actually grew up. It's a pus-filled canker sore on the face of existence and should be bombed into oblivion. It's famous for....umm....glass). That he would follow and accost young boys, especially those who worked out or went to the gym a lot, ask if he could feel their muscles and then offer them the choice of either being raped by him OR to have his initials carved into their buttocks, leading to the alleged bone-chilling question he was said to have asked his victims..."POP OR SLASH?".

At no point did I find out ANYTHING else about him - what he looked like, aside from being huge and black, why he was called 'Purple' Aki, or if he was ACTUALLY real.
To me, he was a spook, an imaginary ghoul, who would appear to friends of friends of friends and ask his question, only for them to run away and escape his rapey clutches. A friend of mine who was a well known bullshit-artist swore blind that Purple Aki had accosted his brother, but, well, I didn't believe him.
To be honest, I was pretty damn sure he didn't exist. 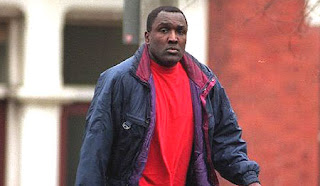 The story that I had heard most often in connection to Purple Aki was that he had approached a boy at a train station and so terrified the boy that he ran onto the train tracks and was electrocuted in his mad scramble to escape. Again, it all sounded like some kind of scare story told by parents to stop their children from going out at night alone or something...but in 1995 I moved to a flat in Toxteth and met people who actually KNEW Purple Aki. Then, I read about him in the local newspaper.

The bogeyman was REAL.

His name was Akinwale Arobieke, and he was known as 'Purple' Aki due to the colouration of his skin giving him an almost purple hue. He was six foot five and weighed twenty stone. He'd been charged over the death of the boy who was electrocuted running away from him but had gotten off due to lack of evidence and possible racial discrimination in the trial. This was the only crime he had ever been charged with, as far as I knew. 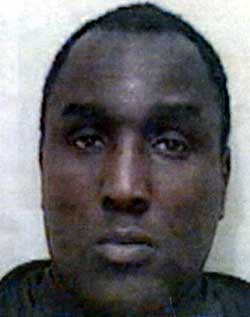 It turned out that the whole 'pop or slash' rape thing wasn't true, and his ACTUAL perversion was FAR stranger than that. He hung out around gyms and suchlike and would ask people about their muscles and general fitness in the guise of being a fellow enthusiast, offering advice and so on, until he would whip out a tape measure and ask if he could touch and measure the hapless victims muscles. If you were particularly unlucky he would either ask you to do push-ups whilst he lay atop you - in the guise of 'providing extra weight to make it harder' - or, his signature move, "inverted piggybacks" – where the victim would squat so he could lean over their backs with his face by their buttocks and his junk on their necks, while squeezing their quad muscles.

Yeah. Now, you're probably wondering exactly HOW he managed to get such rough 'n' tough big-ass guys to DO this kind of shit? Well, it was a combination of his own intimidating stature, knowing that men are way less likely to talk about this kind of thing to the police, and the personal information he had in his 'Stalkers book'.

Well, when he was most recently arrested in 2008 - after already having gone to jail in 2001, then again, almost as soon as he got out, in 2003, until 2006, when he was released on licence and had the following piece of legislation levelled against him, he was "...banned from touching, feeling or measuring muscles, asking people to do squat exercises in public, entering the towns of St Helens, Warrington or Widnes without police permission and loitering near schools, gyms or sports clubs" - one piece of evidence brought up against him was a book containing "...details about victims' body measurements, contact numbers and families." It was alleged that Arobieke would "do research into his victim, confronting them with such details as their father's car registration number or sibling's place of education.".
Yep, he may be a sexually perverse weirdo, but he does his homework.

Now, these brushes with prison and the 'muscle-touching ban' only seemed to serve as encouragement to him as almost as soon as he was released from prison following his 2008 sentencing, he was jailed for another two and a half years for defying the 'muscle-touching ban' in North Wales. So, his notoriety had spread across the whole of the North-West of England and into Wales. He was now internationally infamous, in a small way. 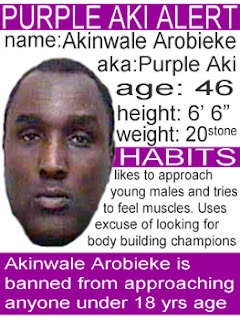 With him safely ensconced behind bars for a while, weightlifters and fitness enthusiasts need not fear dropping the soap in the showers, and entire rugby teams will go unmolested - yep, I shit you not, he actually stalked an entire rugby team. you may be unsurprised to know that while he ws inside, even the prison hardmen were terrified of Aki. Of course wild stories still circulated - such as the one about him being the inspiration for Clive Barker's 'Candyman' character, but mostly he has just faded into the local culture as a figure part bogeyman, part figure of fun... 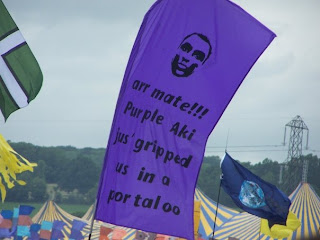 This banner was seen as the Glastonbury festival back in 2008 - it's phrased in the Liverpool, or 'scouse', vernacular, with 'Arrr mate!' meaning 'What-ho fellow', 'gripped' meaning 'accosted' and 'portaloo' meaning 'portable john' - and can even be found on MySpace, Twitter, and in multiple places on Facebook. There is a Purple Aki website, is STILL widely discussed on bodybuilding sites, sites about urbanlegends and local weirdoes, hell, he's even on wikipedia!!

There have been a few songs written about him by local bands, and he gave his name to this wonderfully twisted composition by my good friends, and fellow infamous local weirdoes, a.P.A.t.T....

...and there are a number of 'tributes' to him to be found on YouTube, of which these two are prime examples - not only of what a well-known twisted weirdo he is, but also of exactly how fucked-up the local humour is where I grew up...


...oh, by the way, the opening of those cartoons is a reference to classic british 1970's kids TV show 'Bod', for all you septic tanks scratching your heads in confusion...

It's funny how an infamous sexual predator can become a cultural icon isn't it? The only other one I can think of is Freddy Krueger, except the child molestation thing was conveniently swept under the carpet after the first film, wasn't it?

Mind you, we do have a history in the UK of embracing well-known criminals and lunatics to our cultural bosom - train robber Ronnie Biggs ended up making a record with The Sex Pistols, and a frankly FANSTASTIC movie was made about notorious prison-addict Charlie Bronson.

So there you have it, yet more evidence that us limeys are a bunch of fuckin' weirdoes.

Now, I couldn't think of anything decent that was appropriate to give you as a download, so here is 'Dropped', the second album by Mindfunk - a criminally underrated record made by a mostly reviled band who saddled themselves with a shitty name - for no other reason than that I like it. 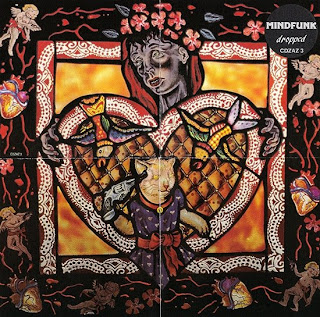 Bon appetit!
Posted by GinofMetal at 8:55 AM

Email ThisBlogThis!Share to TwitterShare to FacebookShare to Pinterest
Labels: 80's, 90's, Cryptozoology, Downloads, Elven Grab-Assery, Repressed Memories, Stuff by The Thing That Should Not Be, worth it for weirdness